The conjugation of say has some tricky pronunciation — learn the right way to say these words! 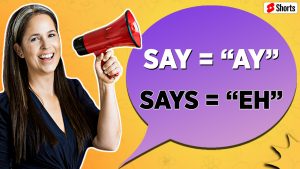 The pronunciation of the conjugation of SAY is pretty crazy in American English.
We have I say, you say, we say, they say.
But he, she, it, says.
No, we don’t say it like that. We say, says.
So the spelling is the same, but adding the letter S changes it. It’s not ei now, it’s e, says.
It says the party starts at two.
I say, he says, you say, she says.