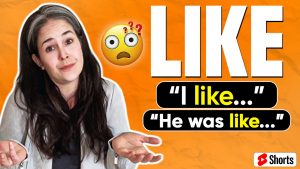 People like to make fun of people that use the word ‘like’ too much.
But you know what? It does have a lot of meanings and in a lot of situations, it’s not a filler word.
You know of course, that we use it for preference. I like that, I don’t like that.
It also means approximately. For example, Mmm, it was like, 10 minutes long.” It’s not a filler word there, it does have a meaning. It was about 10 minutes long, it was approximately 10 minutes long.
So, give people who use it in that context a break. There’s one other way we use it a lot. And that is to mean “said.” If you’re telling a story, “He was like,
…And then I was like.
And then we were all like…”
It’s just a word there that’s means “said”.
So again, it’s not a filler word. It does have a meaning.
So, like, stop giving people a hard time about this.
Ok, there, it had no meaning.