These two words are almost the same — just a little ‘e’ at the end, though, can change not just the sounds but the syllable stress as well! 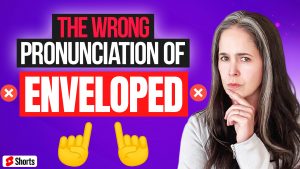 Just sending off my taxes. Let’s go ahead and seal that envelope.
Now, be careful when you’re using the verb that you don’t say EN-veloped.
My friend said that once.
It’s not EN-veloped.
The noun is EN-velope or ON-velope.
But the verb is en-VEL-op.
Stress changes: en-VEL-op.
Envelop.
To wrap up, cover, or surround completely.